After telling you about Delhi, Agra & Jaipur in my previous post, I’ll now tell you about the rest of my trip through Northern India, which led me deeper into the Rajasthan region. Again, all places are in chronological order so you could use this post as a sample itinerary for your trip through India as well 😉

The previous post ended with my trip to Jaipur. From there on, we traveled to Pushkar.

This was the most beautiful city I visited in India. It is small and the complete opposite of Delhi: not chaotic, but extremely quiet and peaceful. There were virtually no other tourists, but I’m not sure if this is always the case. The locals were friendly and there were few beggars and pushy vendors.

The Pushkar Lake is believed to be sacred and is a pilgrimage site. The lake is surrounded by gaths and a massive number of Hindu temples (I’ve looked it up – it’s supposed to be over 500 temples!). You’ll find lots of priests performing ceremonies. We also experienced such a ceremony, and even though I did not really understand what the priest was saying and doing, it felt quite special. A little warning though: I heard that lots of people are getting scammed by so-called priests. We had a good guide (for the whole 3-week trip) who arranged the priest and negotiated a price. If you’d like to experience a ceremony, it’s probably a good idea to ask your hotel for advice and agree on a price beforehand.

Udaipur is also an amazing city. Not as quiet as Pushkar, but still pretty peaceful. It is most well-known for the lake palace (Jag Niwas), which featured in James Bond’ Octopussy. This palace is a luxury hotel, but if you – like me – cannot afford this place, you can still visit it by boat. The lake palace is part of the city palace, and if I remember correctly, the boat leaves from the grounds of the city palace. The boat trip is nice in itself, as it offers a bit of a breeze, which is more than welcome with temperatures exceeding 45 degrees Celsius. The city palace is also worth a visit. It is massive and in a great condition. From the palace, which is built on a hill, you will also get a great view of the surroundings.

In the evening we took a cooking class here, where I learnt some great dishes that I still prepare often. Unfortunately I can’t remember the name of the place, but I think taking a cooking class with any of the well-rated schools on Tripadvisor is probably a great experience.

On our way to the next city, Jodhpur, we stopped to pay a visit to the Jain temple in Ranakpur. This was the most impressive temple I visited during my trip – hands down. In my opinion, it’s beauty is comparable to that of the Taj Mahal. In the temple, which dates from 1458, you’ll find 1444 carved marble pillars, all of them unique. And then there’s the ceiling.. Well, I won’t even start describing it, because I wouldn’t do it justice. Just take a look at the pictures below.

Our next stop was Jodhpur, also known as ‘the blue city’. The city’s main attraction, Mehrangarh Fort, is a complex consisting of several palaces, built on a hill. To be honest, I do not remember what the interior of these palaces looked like. I do remember two things about this place though. Firstly, it offered amazing views of the city. Looking down on the city from the fort, you can clearly see why the city is often called ‘the blue city’. The second thing I remember is how many locals were visiting the fort when we were there, since it was some kind of holiday in India. This may sound as a good thing, but it actually wasn’t, since everybody stared at us and took our photographs. Sure, this happened also during the rest of our trip, but on this particular day it was so much worse. Groups of men would surround us to take our picture, without asking our permission. As you can probably imagine, the visit to the fort thus wasn’t one of my best experiences.

In the afternoon we visited a mausoleum, called Jaswant Thada, and luckily things were a lot better there. The mausoleum is a nice place to visit – the marble is beautiful and the gardens are nice for a walk – but not spectacular.

On our way to Bikaner we stopped at Karni Mata, the temple of rats. In this temple live around 20,000 rats, that are considered to be holy. As a tourist you can enter this temple, of course on your bare feet, and walk between the rats (careful not to step on one!). Even though I was not sure if I wanted to enter this temple (obviously it was optional), I decided to just do it. To be honest, I didn’t  care about the rats once I was in.  The floors in this temple, however, were absolutely disgusting, especially under bare feet. So here’s a little piece of advice: if you plan to visit Karni Mata, bring a pair of old socks 😉 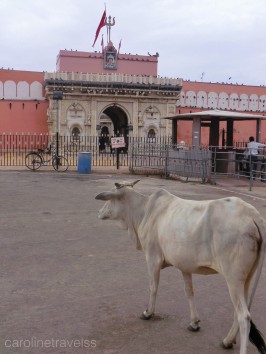 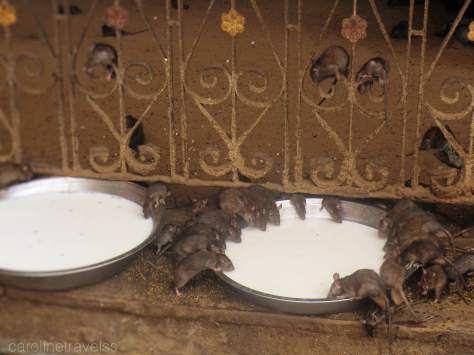 We then arrived in Bikaner. Here we only had one day, so I didn’t get a thorough impression of this town. During the day, we visited Junagarh Fort. In the late afternoon we left for a trip to the desert. We did a camel cart ride and had dinner in the desert.

We paid a quick visit to Shekhawati, a town in a district with lots of old merchant houses, called havelis. The havelis are decorated with colorful murals inside and out. Just walking around this town, you will see some beautiful havelis from the outside. It is possible to see the inside of a haveli. Some families now living in these havelis allow tourists to visit their homes, of course in exchange for a small fee. There are even havelis that are now luxury hotels, so if your budget is not too tight, you could spend the night in a haveli!

After this visit we drove back to Delhi (a very long drive), to fly back home. As indicated in my previous post, I didn’t like being in Delhi. However, I really enjoyed traveling through Rajasthan. Have you been to India, and what did you think of it?