Maybe you have never heard of Cairns. But if you have, chances are you immediately think about the Great Barrier Reef. The reef was also the reason we included Cairns in our trip, and it was AMAZING, but this city and its surroundings have much more to offer! Here’s a list of activities we enjoyed.

Let’s get the big obvious one out of the way first. The Great Barrier Reef is absolutely amazing, and if you go to Cairns, you really cannot skip it! We did a daytrip with Seastar, that has smaller groups and is one of only two companies that are permitted to visit wonderful Michaelmas Cay. We first visited Michaelmas Cay, where we had two snorkeling sessions. We saw lots of colorful fish, as well as a giant seaturtle, stingrays and giant clams. After a trip in the glass bottom boat and a lunch break we continued to Hastings Reef, which was a more challenging reef to snorkel with stronger waves, but beautiful to see. We returned tired but with some great memories.

In the summer months, you cannot swim in the ocean due to stinger season. Fortunately, Cairns has a great alternative: a big communal swimming pool on the city centre’s boulevard, totally free! There’s changing rooms, showers and a large grass field to lay down for some relaxing and tanning. 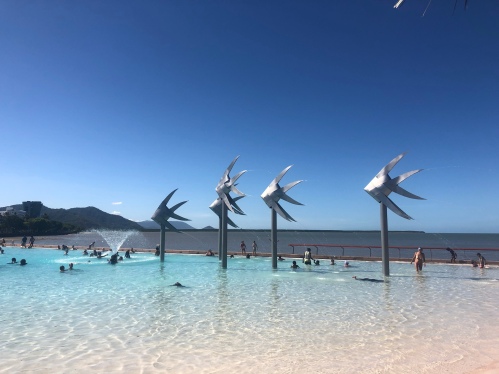 We really wanted to visit Cape Trib and the Daintree Rainforest, but we did not fancy traveling in a group. So we rented a car and drove there ourselves! We left early in the morning and drove straight to Cape Trib beach, where we arrived around 11:00. After a walk on the beach – no swimming allowed due to stingers and crocodiles! – we went to the Dubuji boardwalk for a walk through the rainforest and mangroves. 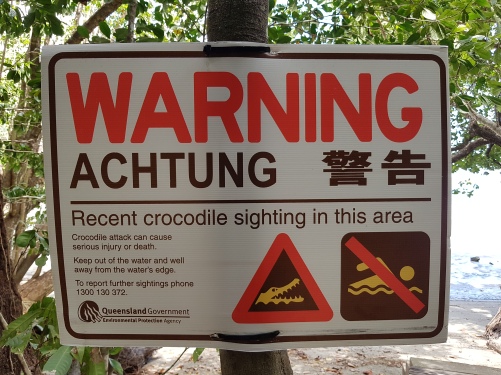 We then had lunch on the beach, after which we drove back towards the Daintree river. On the way we stopped at the Daintree River Icecream Company, where we walked around the orchards. We also tried some (very good!) exotic ice cream flavours, including soursop and wattleseed.

There’s lots of organized tours to the Kuranda Rainforest, but we still had our rental car and decided to visit by ourselves for half a day. Most organized tours include a trainride or a ride in the Kuranda Skyrail, but both were very expensive and busy. So we just went for a walk in the rainforest, after which we drove to a viewing point of Barron Falls. We thought the waterfalls were impressive because of their height, but there was not much water during our visit. We did read that two times a day the hydroelectric station works, during which there should be a lot of water. So if you are going to Barron Falls, check these times and make sure to visit during one of them! 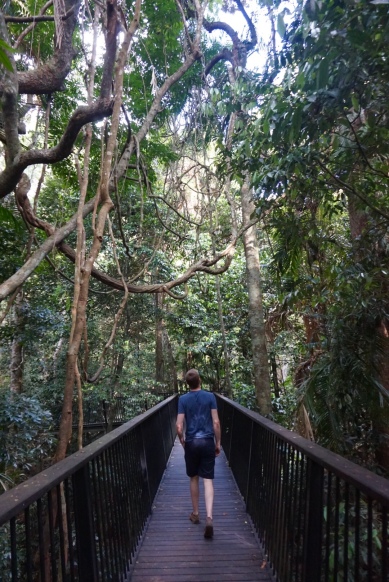 As I had received a bonus from my employer, we decided to treat ourselves and spend it on something we would otherwise have skipped due to the costs: a ‘luxury’ activity. We ended up booking a scenic flight over the Great Barrier Reef with GSL Aviation. The flight lasted 45 minutes, and we flew over Michaelmas Cas and Hastings Reef, the reefs we previously explored snorkeling.

On our second day in Cairns, we rented bikes and explored the city. After swimming at the Lagoon (see above), we visited the Botanical Gardens. They are very large and you can easily spend a few hours walking around here. There’s lots of shadow, so it is a good activity for a sunny day.

After our daytrip to the reef, we walked back to our Airbnb studio and came across this brewery that is located near the boat terminal. We shared a ‘tasting paddle’ consisting of 5 beers. We enjoyed the live music and the ocean views: highly recommended! 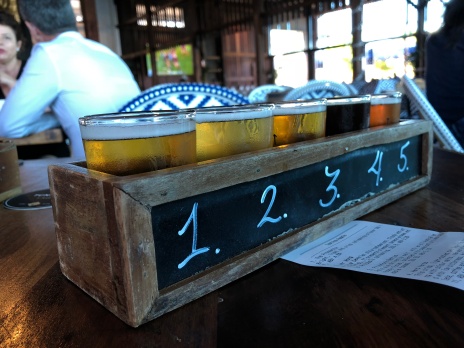 Of course there are many more places to visit near Cairns, but we only had a few days. Our flight to Cairns was cancelled so we ended up arriving a day later than planned. If you have an extra day, I think the waterfall circuit and Paronella park would make for a nice day trip as well.

2 reacties op ‘Cairns and around: our favourite activities’