Looking for a destination that’s perfect for a weekend trip? That offers enough sights and activities to fill a few days, but not too much, so you don’t feel your trip was too short and you missed out on many sights? I would recommend Edinburgh!

As a surprise for my friend’s birthday, I booked plane tickets to Edinburgh. I was looking for a destination that wasn’t too far away and would be suitable for a very short trip, since I didn’t dare plan a long trip as a surprise. The weather wasn’t on our side: it stormed all days, one day was full of rain and on the day of our departure we even had a snow storm. Don’t be fooled by the blue skies in some of the pictures, I can assure you we were almost blown away by the wind and it was super cold. Still, we enjoyed ourselves  (good company helps, too) and would recommend Edinburgh. Read on for a list of things we did.

Climb Arthur’s Seat
Within walking distance of the city centre, Edinburgh has its own mountain. And not just a small hill, but a pretty big one that requires some serious hiking. There are a lot of different paths. Going up, we took a very narrow path with a cliff on one side and branches hanging over. Going down, we took a well-kept, wider path that we think is the easiest and recommended route. It starts somewhere near the Queens’ Dr / Horse Wynd intersection and is indicated with signs. Some advice: wear sturdy shoes, bring water and don’t go during or shortly after rain since the paths get really slippery.

It’s quite a workout but we thought it was amazing to find such beautiful, rough nature just steps away from a city. The views from the top are wonderful, but we especially enjoyed being in nature.

Walk ‘The Royal Mile’
The Royal Mile is not an official street in Edinburgh, but it’s the unofficial name for the route between Edinburgh Castle and Holyrood Palace – that’s almost exactly one mile. We started at Edinburgh Castle, which we didn’t visit but just admired from the outside. We then continued down to Lawnmarket and High Street.

One of the things we enjoyed most are all the countless so-called ‘closes’ lining the streets. They are narrow medieval alleyways that used to lead to private property and were closed off (hence the name ‘closes’). They were often named after the trade or names of their residents. Nowadays, most of the closes are open. They are interesting to visit and the perfect hideout during a sudden downpour. After dark, they look really creepy though and seem like the perfect setting for one of Edinburgh’s murder tales…

Along Canongate you will find the old tollbooth building, a beautiful medieval building with a giant clock. The Royal Mile ends at Holyrood Palace. We didn’t visit the palace but we did stop for a tea at The Café at the Palace, a beautiful tea room / restaurant housed in a conservatory on the palace grounds. The afternoon tea here should be very good, but it was a bit too expensive for us.

Visit ‘Dean’s Village’
Picturesque Dean’s Village is located outside of the city centre, but you can walk there or take a bus. We started our walk at the bus stop near The Dean Bridge. From there, we walked downhill on Bells Brae. You’ll find a bridge here offering a great view on the river and old buildings of Dean’s Village (pictured below). From here, you can take Miller Row to walk alongside the river.

Visit Greyfriars Kirkyard
This graveyard is located in the center of Edinburgh. Most visitors know it because J.K. Rowling based some of the characters in the Harry Potter books on the names of people buried here. For example, you can find the grave of McGonagall here, as well as Moodie. We encountered several tour groups visiting these graves. However, you don’t have to be a Harry Potter fan to come here. The place is impressive anyways, with beautifully adorned tombstones and huge mausoleums. Please keep in mind it’s a graveyard and be respectful!

Explore the rest of the city centre
The Royal Mile isn’t the only part of the centre that’s worth a visit. We would suggest just wandering around the old streets, exploring some of the closes and alleyways and occasionally stopping for a tea and some sweet treats to reward yourself after all the climbing. We mostly enjoyed these sights around the city centre:
– Victoria Street is unique because of its two levels, the many colourful shopfronts make it look very picturesque. The street is also known as Diagon Alley – Harry Potter fans know what I’m talking about.
– Greyfriars Bobby. Near the entrance to Greyfriars Kirkyard (across the street from the pub called Greyfriars Bobby) you will find a lifesize statue of a terrier dog, Bobby, who spent 14 years guarding the grave of his owner until he died himself. It’s a small statue but very cute and the story is wonderful. 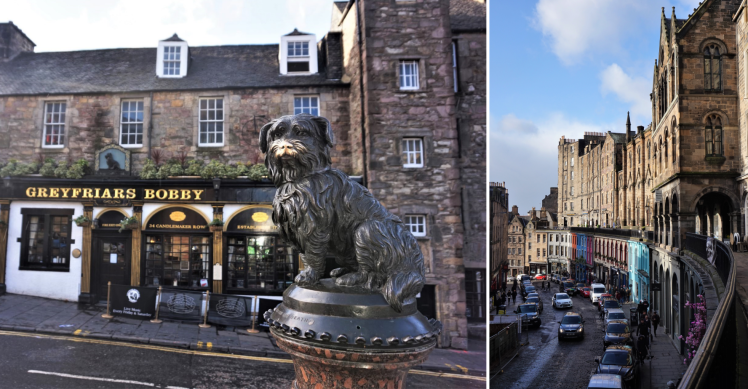 Enjoy good food at the hip restaurants and bars
We didn’t expect Edinburgh to have so many vegan, vegetarian and other hip restaurants and bars. On our first night, we had dinner at a vegetarian restaurant named David Bann and we loved it. We had difficulty choosing since the menu consisted of so many delicious sounding options! So, when our food was served and it tasted (and looked) even better than we expected, we immediately decided to return the next evening for more. Reservations are recommended.

This should be plenty of activities to keep you busy for a weekend, especially if you stop for some drinks and bites regularly. Let me know if you have any questions!

The Netherlands - Another photo of Kinderdijk. One of the most famous places in our country and usually crowded with tourists, but due to the pandemic pretty quiet now. Better take advantage of the few positive consequences of these strange times! •
The Netherlands - Last weekend we explored the city of Dordrecht. We had never been there before but were pleasantly surprised: it has a harbour, beautiful historical buildings and lots of take-away options for coffee or lunch. Which city or cities did you discover during this pandemic? •
The Netherlands - As you may have seen in my stories, last weekend we stayed at a hotel and (finally!) visited one of the most famous Dutch places: the windmills of Kinderdijk. Even though we have seen plenty of windmills before, these were quite impressive because they are so old. Some date back to 1738! Have you also discovered new places in your own country since the pandemic started? •
The Netherlands - Another photo taken in our own little country during one of our walks. What is your favourite place to go for a walk in nature? •
The Netherlands - Quite different from my previous posts: the sunshine has been replaced by a grey sky and fog. But also beautiful! Took this photo yesterday during a 1-night getaway. Restaurants are closed here, but as a hotel guest you can use the restaurant. So we finally were able to ‘go out’ for dinner again 🎉 We are planning to do this more often. Any recommendations from my Dutch followers? •
Spain - Close up of the beautiful building of Bodegas Ysios. Are you interested in architecture and if so, what was your favourite architecture destination? •