You have probably never heard of Nijmegen, my hometown. It’s a small city in the south east of the Netherlands, with lots of history: it even is the oldest city in the Netherlands! I moved here when I started university and we loved the city so much that we decided to stay after graduating.

Grote Markt
The ‘Grote Markt’ is the main square of Nijmegen, and is surrounded by some beautiful old houses as well as the ‘Waagh’ (weighing house). On this square, you’ll find café ‘In de Blauwe Hand’, which is the oldest café in the Netherlands. It is a good place to drink a cup of coffee.

Personally though, I prefer to walk just a little bit further to the city brewery, called ‘De Hemel’ (‘Heaven’). It is possible to do a group tour here (book in advance), but don’t worry if you’re not a group: you can taste all the specialty beers of De Hemel in the brewery’s cafe. If you’re a beer lover like me, I would recommend to get the ‘Heavenly tasting’, consisting of 6 of the brewery’s specialty beers, or – if you’re very thirsty – the ‘Hellish tasting’, consisting of 10 specialty beers. Order some nachos with warm garlic/spinach dip with it, and you will understand why this place is called Heaven! Especially in summer this is a great spot, since it has a lovely courtyard. Right in the city center, but very peaceful. 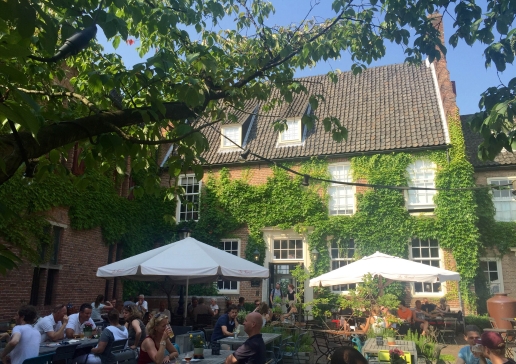 Kronenburgerpark
Just a nice park to walk around in or have a picnic.

Stevenskerk and around
The iconic tower of the Stevenskerk (Steven’s church) is one of Nijmegen’s landmarks. Unfortunately, the tower is currently closed, so it is not possible to climb it. Hopefully it opens again soon, because from the top you have a beautiful view.

The area directly around the church consists of a small medieval alley and cute medieval houses. There’s a tea room here, as well as a house with creepy dolls lining the windows. To see what I mean, take a look at the pictures below. 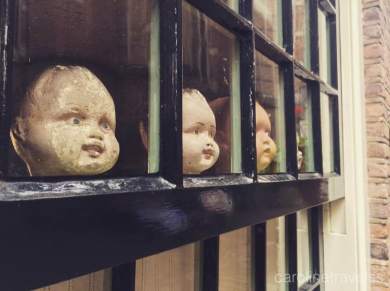 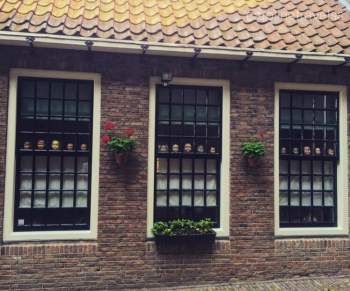 Honig complex
This area is found just outside the city center (around 15 minutes by foot). The old factories of the company Honig (producing sauce, soup, etc.) are now in use as a complex for entrepreneurs. The area houses a restaurant, a chocolate atelier, several bars and more.

Most importantly though, you will find Oersoep here, a micro brewery, as well as Stoom (‘Steam’), a brew pub. The brewery is housed in the old building where soups were produced, which is reflected in the brewery’s name (loosely translated: Primordial soup). In the weekends, you can do a tour here, followed by a tasting of 3 beers.

If you’re not visiting in a weekend, you can go to Stoom, as they serve the beers from Oersoep as well. Stoom is located in an old factory building and has a really cool vibe. Next to beers, they also serve delicious burgers and snacks. 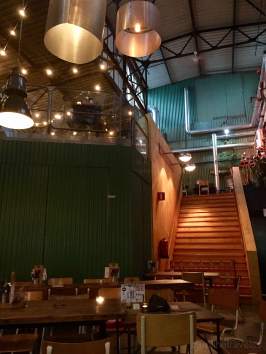 De Kaaij (summer only)
During the summer months, the area beneath the old bridge transforms into a relaxed, festival-like terrain. There’s food trucks, music, some old-fashioned fairground attractions and a nice beach to enjoy your drinks. It’s the perfect place to spend your day whenever the weather is good.

Four day marches & summer festival
Last but definitely not least, each year in July the four day marches take place, the largest marching event in the world. At the same time accompanying festivities (the ‘Vierdaagsefeesten’) take over the entire city center. Stages are set up on every single street and square and in all the parks, offering (free!) music and entertainment.

I’ll finish my post with a fun fact: on the last day of the marches (Friday), people line the last kilometers before the finish to cheer on the walkers and to give them gladiola flowers. This is why the street before the finish is also called ‘Via Gladiola’. Make sure that you arrive early if you want a good spot along the route, as it gets very, very busy!

The Netherlands - Another photo of Kinderdijk. One of the most famous places in our country and usually crowded with tourists, but due to the pandemic pretty quiet now. Better take advantage of the few positive consequences of these strange times! •
The Netherlands - Last weekend we explored the city of Dordrecht. We had never been there before but were pleasantly surprised: it has a harbour, beautiful historical buildings and lots of take-away options for coffee or lunch. Which city or cities did you discover during this pandemic? •
The Netherlands - As you may have seen in my stories, last weekend we stayed at a hotel and (finally!) visited one of the most famous Dutch places: the windmills of Kinderdijk. Even though we have seen plenty of windmills before, these were quite impressive because they are so old. Some date back to 1738! Have you also discovered new places in your own country since the pandemic started? •
The Netherlands - Another photo taken in our own little country during one of our walks. What is your favourite place to go for a walk in nature? •
The Netherlands - Quite different from my previous posts: the sunshine has been replaced by a grey sky and fog. But also beautiful! Took this photo yesterday during a 1-night getaway. Restaurants are closed here, but as a hotel guest you can use the restaurant. So we finally were able to ‘go out’ for dinner again 🎉 We are planning to do this more often. Any recommendations from my Dutch followers? •
Spain - Close up of the beautiful building of Bodegas Ysios. Are you interested in architecture and if so, what was your favourite architecture destination? •