After flying to Perth from the Red Centre, we took the train to Fremantle. We LOVED this place. As in: didn’t want to leave. This seaside town has a relaxed vibe, great places to have a bite or drink and plenty of sights. Read on for our tips on ‘Freo’, as it is lovingly called by locals.

Practicalities
Getting there & around
Fremantle is located around 20 kilometers south of Perth. Coming from the airport, you can take an Uber or a shuttle bus, but if you have some time, it is pretty easy to reach Fremantle by public transport. We took a bus from the airport to Perth Central Station, then hopped on a train to Fremantle.
Once in Fremantle, there’s several options to get around. We enjoy walking and the place is not too big, so that was our main ‘transport’. However, we did rent bikes (we even found free ones – read on for details!) and took an Uber a few times.

Accommodation
Our Airbnb was in a area called ‘White Gum Valley’, a bit further from the centre but incredibly cheap! As mentioned we enjoy walking, there was a bus stop closeby and an Uber to the centre was around 6 AUD. We had a shared bathroom but our own kitchen, allowing us to save even more money by (ocassionally) cooking our own meals.

What to do & see
Architecture
Fremantle has a lot of well-preserved architectural heritage. As I am a sucker for colonial architecture, I liked the Esplanade Hotel and the National Hotel, as well as the Fremantle Markets. Be aware that the markets are only open Friday to Sunday: we unfortunately did not have a chance to see the interior.

Street art
This city has taken street art to a higher level! My personal favourite was the ‘Arc d’Ellipses’ on Fremantle’s High Street. Walking on High Street it looks like random yellow lines were painted on the buildings, but from the viewing point at stairs to the Round House, you can see it as intended.

You can also find art outside of the centre. There is a beautiful artwork on the side of ‘Ootong and Lincoln’ café (that has great coffee) in the area around our Airbnb. Near the boat terminal you can find the Rainbow Sea Containers.

Little Creatures
In the harbour you will find Little Creatures. If we lived in Fremantle (which we would love) I’m sure we would be regulars here. They offer great brewery tours several times per day. We have done a lot of brewery tours, but this was the best one yet. First, we were given information about the brewing process and ingredients, sitting on the terrace. We then walked through the brewery, and the tour ended – of course – with a tasting. And not just a tasting: it consisted of 11 beers and a cider.

If you don’t join a tour, Little Creatures still is a great place to spend your time. It has great beers, of course, but also good food and two attractive outdoor seating areas. On our last day we returned to taste some of our favourite beers again. We sat on the terrace and ordered some snacks as well, of which we liked the hand-cut fries with aioli and falafel with hummus best. It was the perfect way to enjoy the Australian weather before returning to the Netherlands.

And if that was not enough reason to love this place, Little Creatures also has bikes that you can borrow free of charge! Perfect for exploring those artworks outside of the centre that I talked about before =)

Fremantle Beach
The beach at Fremantle is relatively small, but it is clean and looks very attractive. It was too cold to swim when we were there. We did have lunch with a view however at one of the beach side restaurants. 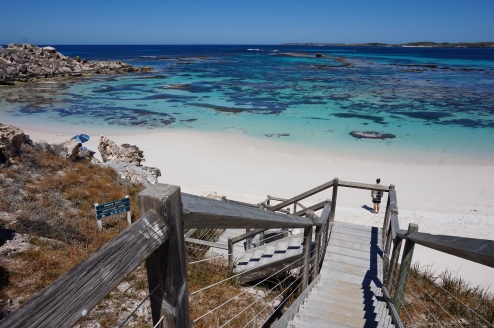 Fremantle Prison
The former prison offers a variety of tours and all are supposed to be really good according to TripAdvisor. Due to our budget we only visited the free exhibitions, but those already gave a really good impression of what life in this prison must have been like.

Shipwreck Museum
One of our Uber drivers recommended this museum, and since we had some time to spare we decided to take a look. It was way more interesting than we expected! The place has a great layout, a good mix of stories and items on display and even an old shipwreck.

Een reactie op “Fremantle: why we fell in love with this funky seaside town!”