It’s been years since I visited Stockholm, but the past few months several friends of mine asked for tips for this city. So I thought I might as well put them in a blogpost. Since most of them are sights, I think they should still be up to date.I really enjoyed Stockholm. The food is tasty, there are beautiful streets and houses and the surrounding landscape is pretty too. However, we visited in March and it was absolutely freezing! The lake near our accommodation was frozen over and there was still some ice and snow in the streets. So – unless you enjoy cold weather – I would recommend visiting Stockholm in summer.

We didn’t let the weather stop us though and visited lots of places. The only difference with my normal trips is that I didn’t drink beer, wine or sangría (way to expensive anyway), but lots and lots of tea. Here are my recommendations on places to visit!

Södermalm
This area, opposite the river of the old city centre, used to be the neighborhood where the working-class lived. It still has lots of traditional working-class cottages. We found the most beautiful of these wooden houses in Mäster Mikaels gata. The street is a charming cobblestones alley and the houses are super colorful and well preserved. From this street, you also have a beautiful view on the Katarina Kyrka, and on the other end of the street is a viewing point.

When I was here, back in 2013, there was a vegetarian restaurant called Hermans in this area (on Fjallgatan), where we had lunch. I did a quick search and it looks like it still exists, and I definitely would recommend it. They have an all-you-can-eat vegetarian buffet for a reasonable price and there’s a terrace on the back offering views on the river and old city centre.

They also have a pretty nice zoo. When I was there, one of the bears had just given birth and her three cubs were playing outside. It was incredibly cute! The zoo also had lynxes, owls and other beautiful animals.

Monteliusvägen
Monteliusvägen is a walking path in the Södermalm area, offering wonderful views over the bay and old city center. We visited during the day and already enjoyed the views, but I think it should be even better at sunset or maybe sunrise – if you manage to get up that early. You can probably walk here from Gamla Stan, but we took a metro to Slussen station. From there it’s a 5 – 10 minute walk to Monteliusvägen.  You can easily combine this walking path with a visit to the cute streets and houses in Södermalm, that I mentioned earlier.

‘Fika’
You really can’t go to Sweden without doing ‘Fika’, which is basically having tea or coffee with something sweet. It is a custom for many locals and we were happy to try it: it gave us a good excuse to occassionally escape the cold outside and warm up with a tea. Also, it’s tea and cake: what’s not to like? We especially liked the cinnamon rolls that are very common in Sweden. They taste amazing with a cup of tea, especially if they are still warm.

Old city center: Gamla Stan
On our first day we explored Gamla Stan by ourselves, on the last day we decided to join a free walking tour. I actually hate walking around with a big group of tourists, but it is a great way to get to know more about the city. We came across many places that we had not noticed before, such as the smallest street in Stockholm and a hidden square. Also, we heard interesting stories about Stockholm’s history. Therefore I would recommend joining a tour, preferably on your first day, so you can return to some of the places you liked and explore them further (plus take pictures without the rest of the group ruining them :)) by yourself later. 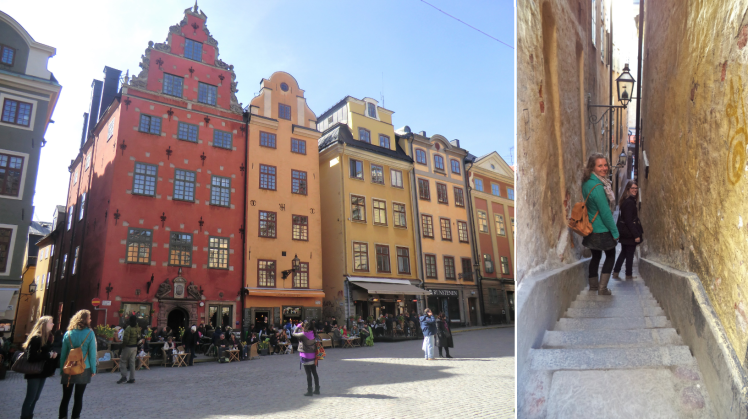 Visit one of Stockholm’s parks
Stockholm has lots of parks and walking paths along the water. We were staying with a friend who lived right next to ‘Hagaparken’, a park on the banks of Brunnsviken lake. The lake was partially frozen over when we were there and it was sunny, which made for a very pretty scene.

Admire metro stations
This probably sounds like a strange activity, but Stockholm is home to some beautiful metro stations. Many of them have been directly cut into the rocks and were then painted or decorated with art. I don’t have directions or pictures – it was too dark for the camera I owned back then – but if you explore the city by metro you are bound to find some of these stations!

I’m hoping to return to Stockholm with my husband somewhere in the future, in summer this time. Did I miss any good off the beaten path places, that we should definitely visit?